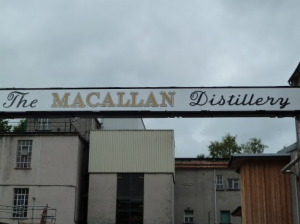 If you are a whiskey drinker, you’ll love The Macallan. It’s one of the most famous Scotch whiskey makers with the biggest “archives” of bottled whiskies. Naturally, the Macallan 1951, for instance, will cost $10,000. Tourists can see it be made from beginning to end; it’s called “The Precious Tour”. They’ll offer you a taste at the end of the advanced tour distillery. 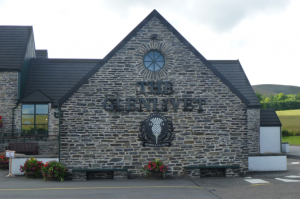 The Glenlivet, founded in the 1800s when there became a problem with whiskey smugglers, the suffering began for the Scottish. The whiskey smuggling epidemic began when more than 200 illegal stills were discovered in the glen. (This is where the present distillery is located.) You’ll be awe-inspired as a whiskey lover when visiting The Glenlivet. With the mountain ranges that surround the distillery, you’ll be mesmerized by the historical significance as you go on the whiskey tour trail. These are the bootleggers routes; the tour will eventually give you several of Glenlivet’s whiskey samples of it’s finest “expressions”.

If you love Bacardi, then thank Captain William Fraser who established Royal Brackla on the grounds of the estate of Cawdor Castle. Fraser served in the British Army (1812) for the United Kingdom and after he retired, he established it as he supplied King William IV’s Royal Court with his “goods”. The King gave him an award for the “first royal warrant” for the single malt.
Today, it’s doors are opened to the public. John Dewar & Sons Ltd. operates it and although for those who would love to tour the historical whiskey distillery for whiskey tours, some vintage samples and tastes, the historical tours are by appointment only. The Scotch distillery has a mash tun where 12.5 tons and 8 “wash backs” that results in a total volume of 480,000 litres. 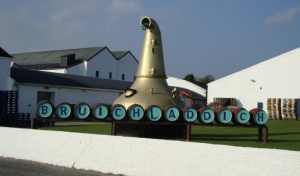 The first distillery to bottle whiskey on the island of Islay. Bruichladdich built in 1881, is 1 of 11 distilleries on the island. Although this one is said to be the heaviest peated and smokiest beverage distillery compared to the other 10. (They are considered the top of the line in botanicals; a gin of 22 botanicals which are a rarity on the island.) The distillery is proud to be one of the distinguished winners of awards for the best whiskies in the world. Touring the distillery and sampling one of their “super-peated” Octomore’s will deliver a great adventure in itself as well as the adventure you’ll have getting to the island. 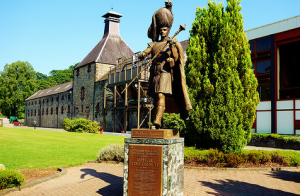 Some of the big brand whiskey names are brought to you by the Dewar’s Aberfeldy Distillery. Touring this distillery, you’ll learn the historical significance of the brand. You’ll also be able to take a sip of freshwater from the nearby stream of Pitilie Burn which is famous for it’s freshwater. Learning about the Dewar’s World of whiskey an exhibit that travelers will not miss. In addition, tourists will be able to fill a bottle of the most exclusive cask which is a strong whiskey that becomes a rare souvenir for the whiskey lover. 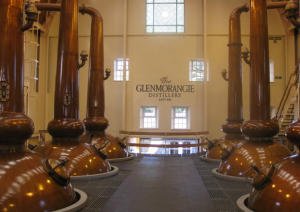 In northern Scotland, Glenmorangie sits on the shores of the Dornoch Firth. It’s the home of the tallest stills (which is 17 feet). The casks that are sourced and matured to its perfection are made “twice” compared to the standard five or six times by many other distilleries. Tourists and travelers will be able to have a nice walk on “The Heritage Tour” along Glenmorangie’s water source (the Tarlogie Springs) and have lunch along the way including having a sample of whiskey too. This make for a perfect visit to Scotland while having the “perfect day tour” for all you whiskey drinkers. Considered as one of “the most difficult” distilleries to get to in Scotland, Highland Park, which comfortably sits on the Orkney island, is part of archipelago of the northernmost point of Scottish land. In 1798, it’s considered the smuggler’s distillery because of the “notorious” Magnus Eunson whom built it. It then massed into a whiskey distillery where it grew from it’s illegal operation to one of the few award-winning whiskey distilleries in the world. It’s also 1 of 6 distilleries which still malts their own barley, plus the visit will include “a lesson in the whiskey-making process” from malt to distilled and then a sample of Highland Park’s very own whiskey brand.
Concluding the seven best whiskey distilleries in Scotland is the idea of traveling to a faraway place where the regulated spirit is considered a class of it’s own. The unified characteristics of the fermentation of the whiskey are the grains, distillation, and the aging wooden barrels it’s processed in. Drinking a glass of whiskey is much finer, amid the smooth taste. Finally, touring one of the seven of the whiskey distilleries in Scotland and being surrounded by the product where it’s processed while being able to sample a vintage sip, and maybe take a bottle home, is even better.